Raising The Bar Of Forage Excellence - Click For More

Todd Bengen estimates his family has improved dry matter recovery by three percentage points on their bunkers of corn silage, alfalfa haylage and earlage – just by fine-tuning covering strategies. With more than 2,200 irrigated crop acres and nearly 4,300 dairy cows and replacement heifers to feed, those savings add up.

“It costs us a lot to plant and harvest high-quality forage, so the more of it we can save and feed, the better off we are,” says Bengen, who operates Ruby Ridge Farm near Pasco, WA, with his father, Dick, and Dick’s wife, Ruby.

A few years ago, the Bengens replaced one of the two layers of conventional white-on-black plastic covering each bunker with oxygenbarrier film. They also began covering the sidewalls of their bunkers with plastic, all on the advice of Keith Bolsen, a Kansas State University professor emeritus and silage expert now based in Austin, TX.

Bolsen, during his 40-year-plus career, has encouraged dairy and beef producers to strive for singledigit silage dry matter or shrink losses. Proper sealing will help producers get part of the way there, he says. But it’s just one of four strategies he suggests will minimize losses and maximize quality.

1) Line up a great silage team. “It’s all about communication, education, preparation and teamwork,” says Bolsen. He encourages livestock producers to meet with their custom harvesters at least a month before harvest to communicate all expectations and plans. “Let your custom harvester know ahead of time what stage of maturity you’re looking for, what particle size you need and how you want the kernels processed. Talk about how you’re going to execute harvesting, packing and covering. Put back-up plans in place in case something goes wrong, such as a mechanical problem with one of the packing tractors.”

2) Properly size bunkers and piles.“Size them so they are safe and so you’re removing 12” (of feed) off the face in cold weather and 18” off in warm weather.” That will minimize the amount of silage exposed to air and prevent heating during feed-out.

3) Achieve packing density targets. Shoot for a minimum packing density of 15-16 lbs of dry matter/ cubic foot, advises Bolsen. “Density is important because it’s inversely related to dry matter loss – the higher the density, the lower the loss. One pound of dry matter density equates to approximately 1 to 1.5 percentage points of shrinkloss reduction.” For spreadsheets and other information on estimating silage density and sizing bunkers and piles, Bolsen recommends University of Wisconsin Team Forage resources, found at http://bit.ly/1hsYqlU.

The final step is to put gravel bags on the seams that go across and along the sidewalls and cover the plastic with tires.

The film layer keeps oxygen out, and the second layer protects the film from damaging ultraviolet rays. “The film reduces the losses in the outer 2-3’ of silage by up to 40-50%,” says Bolsen. “With as much as 16-18% of the silage in the U.S. in the outer 3’, there’s a huge premium on protecting it.”

The silage industry as a whole should recognize the tremendous economic incentives to minimize storage and feed-out losses, Bolsen says. More than 117 million tons of corn silage and 18 million tons of alfalfa haylage – $9 billion worth of forages – were harvested in the U.S. last year, he adds.

“Unfortunately, there’s a 16-20% difference between what’s harvested and what’s actually fed. That represents a loss of $1.4-1.8 billion in forage inventories.”

Looking for more information on bunker covers and how to increase your production and decreasing spilage? Don't hesitate to contact Ronnie and the team at This email address is being protected from spambots. You need JavaScript enabled to view it. or 678.628.2882. We can, not only provide you the tools needed to decrease spoilage, but also the expertise to ensure you are doing it right and keeping as much forage usable as possible.

Have The Best Hay? 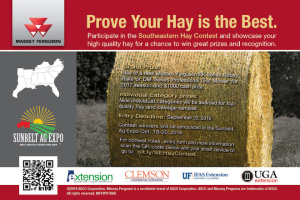 Find What You Need